FRANCIS of Assisi - The Musical
​

FRANCIS had premiere as a musical in 2010, and afterwards it was staged as an oratorio in churches. (No acting on stage). In Assisi, Italy, Cracow, Poland and Wiena in Austria it was performed with success in Cathedrals.

The Story:
Francis of Assisi (1182-1226), founder of The Franciscans, was responsible for a peaceful evolution all over Europe in the 1200 century based on compassion with the sick and poor. His message of peace and love amongst all people regardless of creed, religion or belief was extraordinary.
He was born in the Italian town of Assisi, son of a rich cloth merchant, and as a young man, he lived a superficial and carefree life with his friends. They often toured the nearby towns as jugglers and troubadours, and this scenario opens the musical-oratorio.

When Francis began to give away his money and even expensive clothes from his father’s shop to the beggars, his father reported him to the bishop. This conflict escalated to a breakup with his father and Francis decided to be a monk. He started to preach about peace and love among all people and of the joy of poverty. In the beginning people laughed at him, but that soon stopped when one of Assisi’s rich merchants sold all his property and joined Francis. Soon more people followed, and a new monastic order began to take shape. In 1210 Francis established the order and called it ‘Friars Minor’. Within a few years the number of brothers increased to several thousands.
Among his followers was a young woman, Clare Scifi, and in 1212 Francis initiated the 18-year-old Clare as a nun.

At the beginning of the 1200s, the Sultan ruled in Jerusalem, and in 1219 Francis traveled there, attempting to convert Muslims to Christianity. It was not a success, but his message about utter poverty, peace and kindness to all creatures, made such an impression on the Sultan that he released Francis and even offered him gifts.
At the age of 40, the many years of asceticism had worn out Francis’ body, and he decided to retire as the leader of the order and withdraw to his beloved mountain, La Verna, 100 km from Assisi. Here a miracle took place, in the year of 1224.
Francis received the marks of Christ´s wounds on his hands, feet, and side. He became the first recorded stigmatic in Christian history, and although he tried to hide his wounds, the news of the miracle spread rapidly.
Time was starting to run out for Francis, and on October 4th, 1226, he died in the little church of Mary of the Angels. The brothers followed his wish to be placed naked on the bare ground on the spot where he died.

At the moment of death, the world’s most humble man still kept his own promise of poverty in such an intensive way, that no one else could have done. Lying there on the ground, with his arms spread out like a cross, Francis showed that he possessed nothing.
​And the stars were shining on a happy man. 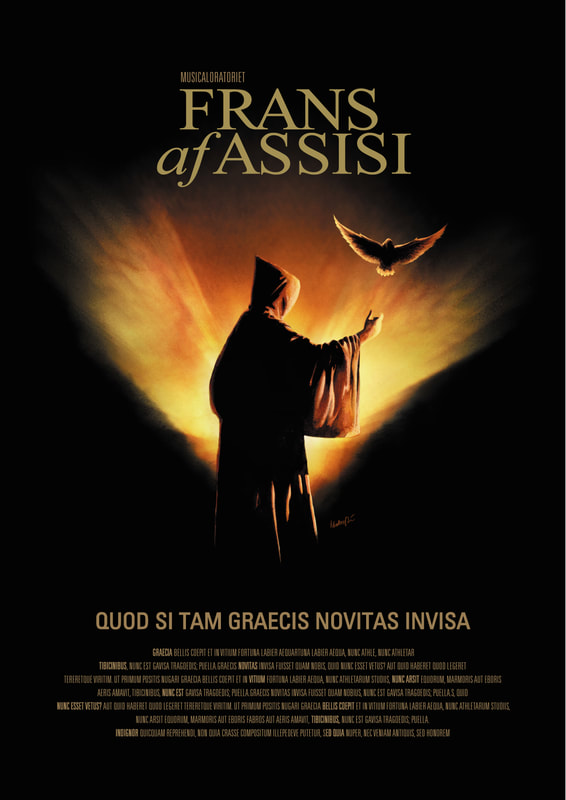